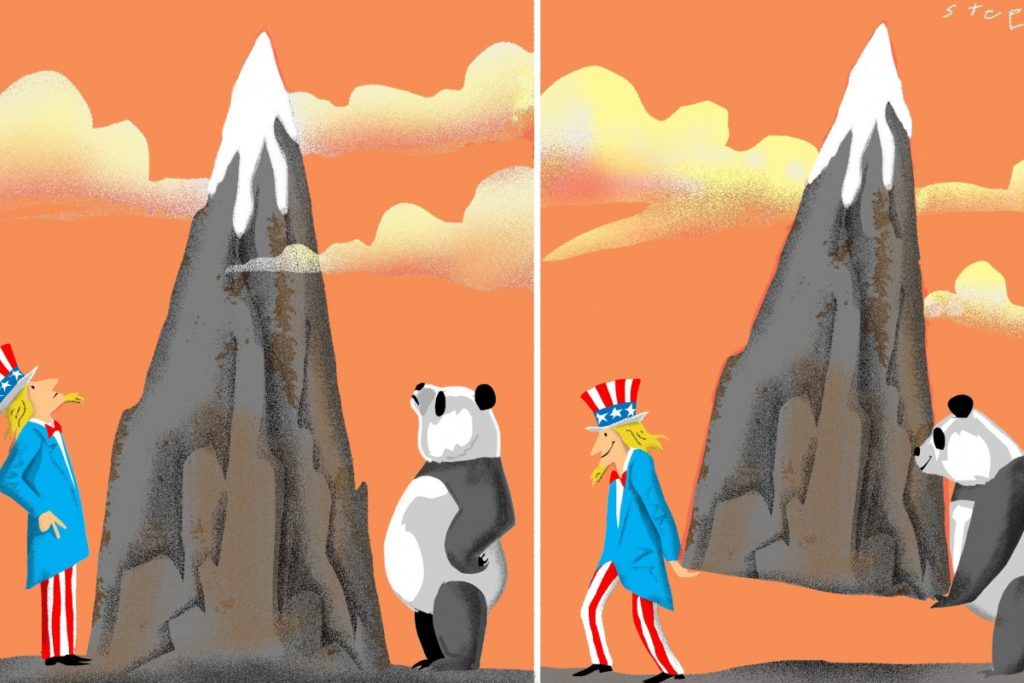 Instead of containment and conflict, the US and China need to engage constructively, accept intractable differences, and move towards co-leadership on global issues from climate and hunger to nuclear proliferation.

We have reached a critical inflection point in our relationship with China, made all the more urgent due to Covid-19. The virus and resulting pandemic are an unfolding story, yet several lessons have emerged. The first is that most countries – including the United States – were simply unprepared, even as the viral threat became well known.

We also know there is much to learn from countries that have responded relatively well to the pandemic: South Korea, Taiwan, Singapore and, yes, China. They have experienced relatively modest health and economic effects so far, thanks to some combination of extensive testing, monitoring, social distancing and quarantining.

Imagine how the world would celebrate if the US and China were to announce a coordinated and continuing leadership through a fully funded and staffed World Health Organisation. The WHO could then disseminate its research on the make-up and spread of the virus, profile of the most vulnerable, most effective mitigation techniques, medical supplies, hospital facilities and staff required, and work necessary to rapidly develop and distribute a vaccine.

Stockpiles could quickly be built up and accessed via global supply chains. If that model were in place when Covid-19 hit, the human and economic losses are likely to have been a fraction of what they will be.
Instead of working with China, we find ourselves doing the opposite, like many in the US, blaming the pandemic squarely on the Chinese. How did we arrive at this historic low point?

For decades after the US and China normalised relations in 1979, the US assumed a wealthier China would shift towards liberal democracy as Chinese people demanded greater freedoms and the right to select their leaders.

Over the past decade, the US has come to understand that its assumption was wrong and that China threatened its role as the undisputed global leader, economically. China began to be perceived as a strategic threat instead.

This led to a new US strategy of containment. Economically, we took initiatives to substantially increase intellectual property protection, reduce the trade deficit with China and repatriate manufacturing jobs. We also launched a trade war. We cut China’s access to some advanced technologies and challenged it in the South China Sea. We accused visiting Chinese students and scientists of spying, and tightened up on their visas. We attacked the Belt and Road Initiative as a debt trap designed to force China’s will and governance model on developing countries. We urged other countries to ban the use of 5G leader Huawei, on the theory that Beijing would access transmissions to spy.

Yet containment has accomplished little other than to increase tensions (with the exception of the long overdue intellectual property protection). In many cases, they had the opposite effect.

China’s economy, though slowed by the trade war, continues to grow significantly faster than America’s, fuelled by urbanisation, a rapidly growing middle class and a rising services industry.

The Belt and Road Initiative is generating substantial goodwill and economic opportunities, with China’s trade with Africa now nearly four times larger than the US’. China is positioned to succeed, given its advances in renewable energy, high-speed rail, 5G, advanced computing and artificial intelligence.

Every year, it adds a population of graduating scientists, technology specialists, engineers and mathematicians several times larger than the comparable US graduate pool. In nearly every way, containment has failed.
What we need is a return to constructive engagement that would lead to collective global leadership. For this, the US needs another fundamental mindset shift. There needs to be acceptance on both sides – particularly the US – that each country’s model is rooted in its unique history and culture.
The US model emerged from early settlers’ experience in Europe. Having escaped monarchies, a class-driven economic system and limited freedoms, the founding fathers designed a minimalist democratic government with maximum freedoms. The idea was to have America shaped and driven by its free enterprise economy, not the government.

China’s model was shaped by Confucian values with a focus on family and society. Its history of constant threats of invasions from the north, floods, famines and other disasters also led, almost inevitably, to an all-powerful central government. Implicit in the model is that, like dynasties, governments would endure as long as they had people’s support.

Unlike the US, where citizens expect some sense of control while selecting leaders through elections, China selects its leaders through merit, ongoing performance reviews and examinations. China has no popular election above local-government level but popular support for the government is among the highest globally, according to Pew Foundation research.
For thousands of years, China focused inward – in contrast to an interventionist US spreading democracy and protecting human rights. China still has among the most peaceful records of any major country in terms of involvement in foreign wars.

It is active globally to improve its economy for the ultimate benefit of its people. Despite assertions by China hawks, China has proven it has no interest in exporting its governance model.

Such is the unchangeable nature at the core of the US and Chinese models. If the two powers can accept what cannot be changed – and cannot be expected to change – the doors would begin to open for cooperation, which we need desperately.

Dealing with the pandemic jointly would be a great start. Many other global issues stand to benefit enormously, such as climate change, clean air and water, hunger, refugee crises and nuclear proliferation. China would welcome this development.

Whether the US is ready to accept China as it is, refocus its energy and resources on core domestic issues, and co-lead on global issues, remains a question. Far easier to ask if the world would celebrate such a partnership. It would.